Seated in the Samso Energy Academy, on December 11, 2009, while COP 15 negotiations heated up in Copenhagen, Soren Hermansen tells the story of  Samso’s transformation. 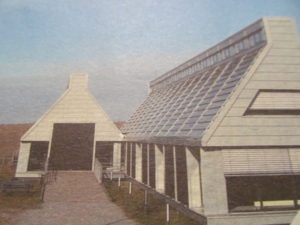 “Ten years ago, here on this island, windmills was only for socialists and hippies,” says Hermansen, leaning in, as though anything he’d say on Samso would be a secret from it’s residents.

“We are a traditional island where we’ve

“In 95 or 96 the slaughterhouse closed down because of rationalization. So few people are working on small scale farms anymore. When I was a farmer there were no little farms. I had a vegetable farm. A family cannot live from one small farm. Today maybe there are three farms left. There are not a lot of organic farms on the island,” said Hermanson.

As a struggling farmer, at a time on the island when new jobs were scarce, he went to a meeting to learn about a contest, led by, in Hermansen’s words, “some mainlanders.”

The Danish Ministry of the Environment sent out a competition to find a community that thought it could change from fossil fuels to 100% renewables, in ten years. The talk was to form an NGO and create a master plan.

Soren saw an ad in the newspaper, applied to be leader of the project. He got the job and a half time salary.

“From then on,” Hermansen tells me, “I had to promote the project.”

Early on he decided, if he was to call a meeting and say we’re going to talk about renewable energy, nobody would come. This was in 1998. Instead he pitched meetings about liquor lisences. People came.

“There were maybe fifty business people at these meetings. They were not really interested in energy,” said Hermansen.

He’d already decided he wanted to talk to people who would be difficult to convince.

“It would be a waste of time,” he added, “to talk to the converted.”

They talked about independence from foreign influences and the risk of oil prices.

People on the island liked the idea of business development – new jobs. He did the ground work talking to the people, building trust. A master plan was created. Two villages would have district heating.

When he first asked, “Who will volunteer for working groups?” he said, “all the hippies signed up.”

“This is not good,” he thought, they are radicals. They are not good ambassadors. They won’t communicate well with the conservative farmers.

So then he and a few others asked, “Who is the key people in this community? We asked around and the same names came up.”

Hermansen would contact those people ahead of the meetings and say,” if there is a lot of job opportunities for you, I want you to be the ambassador in your community.”

When they had the public meetings in communities, many times the key person was the blacksmith.

“Many of the people on Samso are niave original people,” Hermansen explained.

Hermansen achieved a local consensus because it made sense for the local community. People felt they’d save money.

Part One in a series