If you’d asked me fifteen years ago if I wondered where my electricity comes from, I’d have said, “no.”

I hadn’t given it a  thought.

I lived without power in the aftermath of Hurricane Juan, September 29, 2003, in a northerly part of the world where ‘hurricanes don’t happen’. The nine days without power in Halifax, the ‘city of trees’ uprooted and toppled, vehicles crushed, and branches strewn everywhere, was unforgettable.

Perhaps we only think about our power when we loose it, or when our bill arrives. Maybe that needs to change.

We were lucky at our place, post Hurricane Juan. The sun came out. For October it was unseasonably warm. We had hot showers because our domestic hot water was pre-heated by solar thermal panels on our roof. They run independently of the grid though we are grid connected. They derive solar electric power from a small PV panel that came with the system. They paid for themselves in self sufficiency during that week of hot showers.

But the city looked like a war zone, if you could get around to see. Toppled trees and downed power poles everywhere. Environment Canada’s Canadian Hurricane Centre estimated the number of trees in Nova Scotia lost in the storm to be in the millions.

Our neighbours in New Brunswick were not so lucky in the aftermath of their January, 2017 ice storm. Those who lost power shivered in their homes without power or heat, in frigid sub zero temperatures, for over a week. New Brunswick Power dubbed it the second ‘worst ever ice storm’ in four years.

It could have been us.

Easterners could freeze in the dark was a headline in the Globe and Mail on May 28, 2007 that grabbed my attention. The realization of our energy insecurity in Nova Scotia  added fuel to my obsession with energy issues. It helped me make the connection between power and politics.

But all we really want is to have our hot showers and our cold beer, right?

Increasing extreme weather events are caused by human induced activity. That’s the conclusion reached by a world wide consensus of scientists. That activity is primarily because of greenhouse gas emissions released into the atmosphere, due to our historic fossil fuel driven electricity and transportation usage. Those same fossil fuels that have given us our quality of life could be our undoing if we don’t figure out smart ways to change our habits.

I’m in search of solutions… of hope…in a time when the last three years have been the warmest on record, ever.

This site is an attempt to fill an energy awareness gap between the experts and the common folk, like me. It may also serve as a public forum and knowledge exchange for the public good. 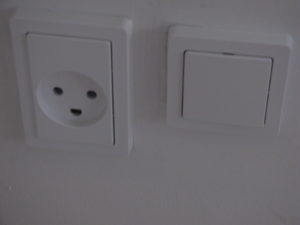 So …….  when you plug something in, do you wonder where the power comes from? Or do you plug in without thinking?

Do you ever wonder what the generation mix is?

If you live off – grid you do. If you self- generate by wind and solar, a sunny winter day with a breeze is a great time to do a laundry.

When you flip on the switch, do you think about what time of day you are activating power, or do you do it automatically while thinking of what you will prepare for supper?

You’re welcome to journey along with me, on my quest to find today’s best solutions for our most pressing energy problems.