280Kw PLAT I soon to be floating platform at A.F. Theriault Shipyard in Meteghan, in August, a month before today’s voyage across to Grand Passage.

“We installed the platform today,” said Greg Trowse, four days after the Department of Energy and Mines issued a marine renewable permit to Black Rock Tidal, the Nova Scotian partner in the consortium of companies on this project.

A floating tidal platform known as PLAT – 1, was transported by water to Grand Passage today and secured to it’s specially placed moorings, according to Trowse who said, “there are no blades yet.”

The platform launched after sunrise this morning from Metaghan, with the assistance of local vessels TyKiSha-J of Westport and Island Lady G of Freeport. The goal at low water midday was to connect the platform to moorings in Grand Passage. It was achieved.

Mike Huntley, of Huntley’s Sub -Sea Aqua Construction: Underwater Specialists, was a key person involved in the placement of moorings yesterday. His presence during today’s operations was “critical”, said Trowse.

The PLAT – I floating platform has been ‘on the hard’ at the A. F. Theriault Shipyard in Metaghan since mid July, after it was assembled from component parts it arrived in, inside containers, aboard the Atlantic Sky container ship from Scotland. Workers have been reassembling it for weeks. An electrical engineer with Sustainable Marine Energy, pictured below, was checking performance of electrical systems in mid August.

The long established German company, Schottel Hydro, manufacturer of the turbine blades, is the parent company of Black Rock Tidal, the local partner in the project.

Joe Fitzharris said “there will be a full suite of environmental monitoring.”

The thirty day public comment period initiated by the Department of Energy has ended.

Pictured below at a community engagement session last June in Freeport, Nova Scotia,  an anchoring method used in Scotland is shown. Moorings, rather than raptor anchors, have been chosen as the preferred method for holding the platform in position, in the Grand Passage, between Freeport and Westport, Nova Scotia. 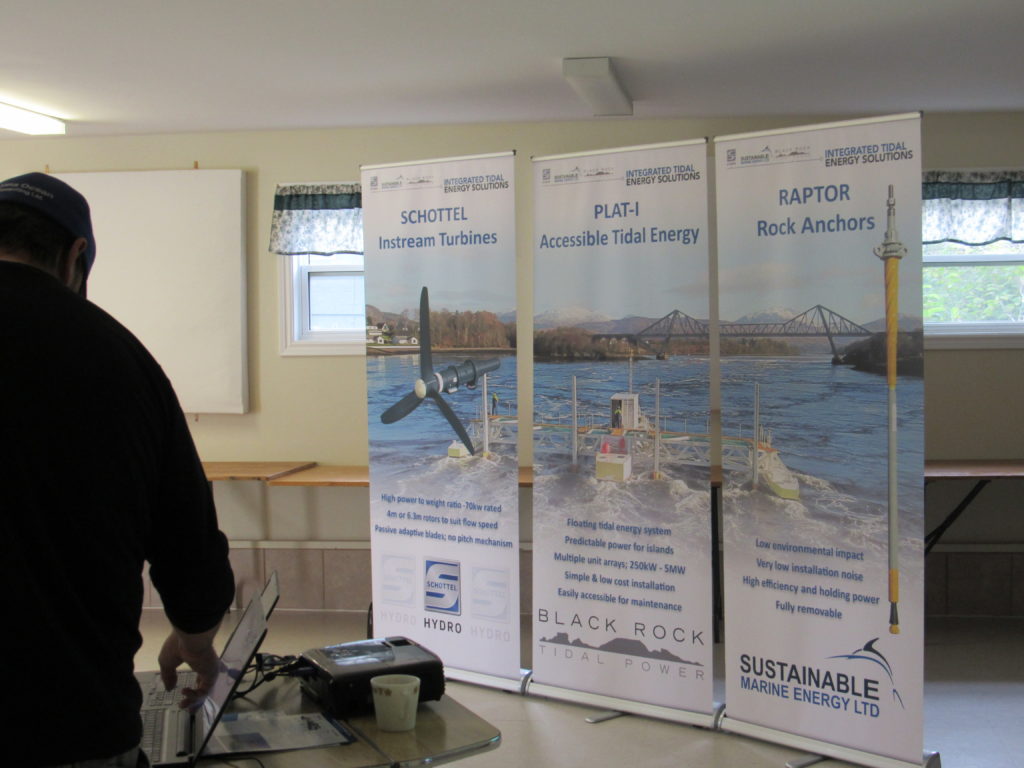 McGlynn heard citizens questions and concerns about whales. He said, “we don’t have whales where I come from. We have basking sharks.” He asked the people to tell him, in what circumstance they wanted ‘shut down,’ meaning the turbine blades could be shut down in urgent circumstances, such as the sighting of a right whale or whales in the area. He explained the shutdown situation in the area of Scotland where the last testing took place was at times when basking sharks were present. 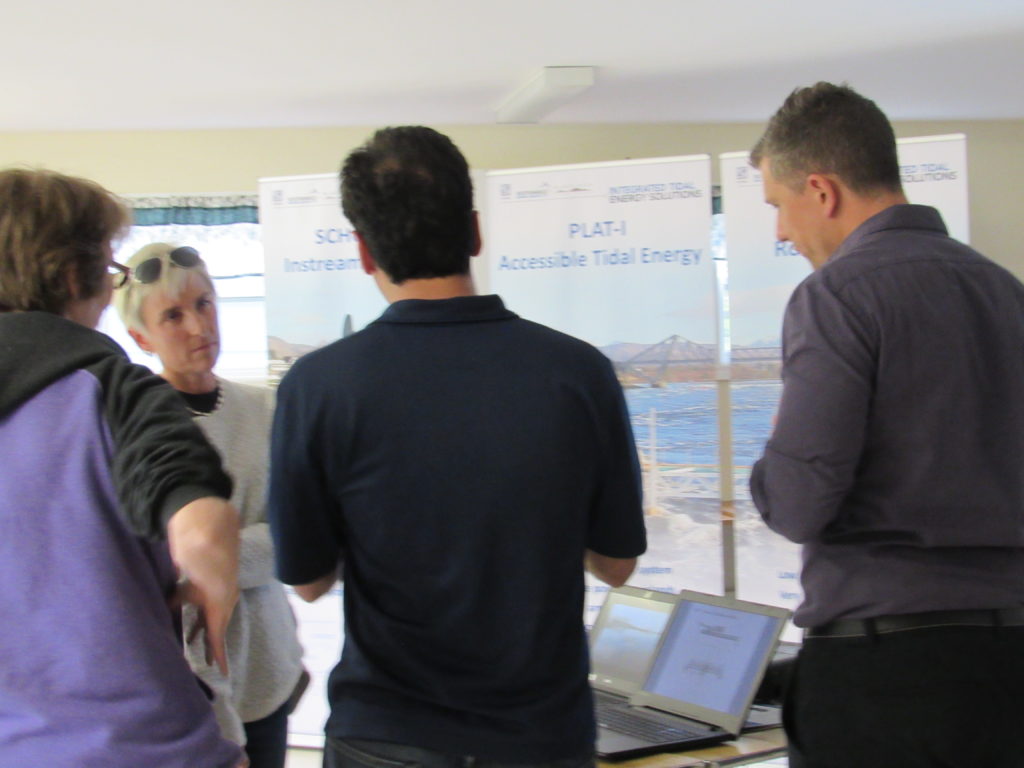 There are no blades on the floating tidal turbine platform yet, according to Trowse. There is no intention to attempt to convert tidal power to usable energy for the Nova Scotia electrical grid at this site, nor is there an intention to send it to the Nova Scotia grid from this location. The infrastructure is not in place. The goal according to John McGlynn is to test how the equipment stands up in this marine environment, harsher than the one in Scotland where they conducted testing recently, yet not as harsh as the Black Rock Tidal berth at the Fundy Ocean Research Centre for Energy (FORCE) in the Minas Passage, where they hope to eventually do trials, depending on how their equipment fares in this Grand Passage site.

The turbines won’t be operational until late October or early November, according to Trowse.