In an era when small – scale family farmers are hanging up their hoes, Amy Smith, 42, and Verena Varga, 41, are bucking the trend. They’re digging in, growing Heart Beet Organics; increasing profits each year. 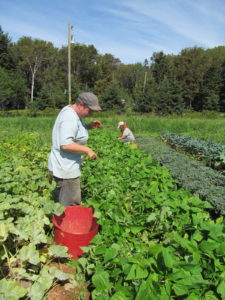 Smith had over ten years working on farms and two summers managing a market garden in Quebec, where she met Varga.

“We were not about to become poor starving farmers,” said Smith. “We went into farming by choice.”

“We both took courses on business management for running a farm,” says Smith.

“It forces you to look at the dollars and cents of it, of what it’s actually going to cost to run and manage a farm.”

They’d studied soil maps and did their own customer survey at the Charlottetown Farmer’s Market before buying land on PEI. Consumers told them the demand for organic food exceeds the supply. They saw the opportunity and went for it.

A header house with an attached greenhouse was their initial pull to view an acre and a half plot in Darlington, PEI.

But it was out of their price range. The house was bigger than they needed.

After an amazing back and forth over strawberry shortcake with the owner-sellers, things changed.

“He didn’t want to sell, but he had heart issues…He really liked that we wanted to use the greenhouses,” said Varga. “They came down in price and we went up.”

The deal was pretty much sealed. They hadn’t even seen the inside of the house.

The location, only a fifteen-minute drive to the Charlottetown Market, meant they wouldn’t face a long drive to get there Saturday mornings. 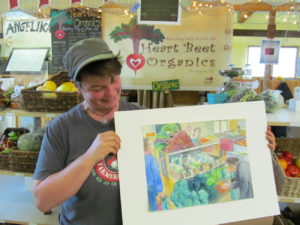 She’s a natural. She dishes out nutritional tidbits as sides along with the healthy produce she grows. Repeat customers gobble it up.

Vargas works the Wednesday markets, manages the money and the website. It includes a page about each vegetable, complete with recipes. She updates it weekly, dovetailing news for their Community Supported Agriculture customers.

They set up a C.S.A system with a handful of regular customers their second season.

Each C.S.A consumer pays $500 in February and March. That’s when farmers have the most expenses, buying new equipment, manure, and seeds, with no winter produce sales to offset these expenses.

In round numbers, C.S.A participation has doubled each season.

The C.S.A pick ups run for twenty weeks, from May until Thanksgiving. On Tuesdays, between four and six customers come to the farm for their weekly share of vegetables.

If they don’t show, they can pick up at the Charlottetown Market on Wednesday.

The openness of Smith and Varga to learn from other farmers and their willingness to adapt to solve problems and improve efficiencies is key to their success.

They changed a lot of their practices after Varga heard Jean Martin Fortier speak at the 2012 Acorn Conference in Charlottetown.

At first they’d set everything up in wide rows for weed management with a tractor.

Thanks to Fortier’s recommendations for a market garden the same size as theirs, they now plant more intensively. There’s no longer space between the rows for tractor wheels.

“In some cases we’ve doubled and tripled food production in the same space,” said Smith, “just going from three rows of carrots in a bed to five, and not seeing any decrease in size or yield.”

They grew a diverse mix of crops at first; to see what people wanted. But they didn’t grow yellow beans. Islanders love their yellow beans. Now they grow plenty.

Continual review of their yields compared to profits is an ongoing part of their operation. A major focus in winter; it’s paid off. They’ve increased their income considerably each year.

Lot’s of farmers take off farm winter jobs to help make ends meet. Not Smith and Varga. “Winter is all about planning for us,” said Varga.

One winter decision to decrease growing sweet corn and increase kale production netted them an increased income of $10, 000, the next season.

They’re no strangers to hard work, yet they know the importance of work life balance.

“It’s like this,” says Varga, “I could have sold every leaf of spinach at the market today and made an extra fifty dollars. Or we could stop picking at five, relax and enjoy a good meal together.”

In reality, Varga  updated the website after supper, but at least she’d had a break.

Over thirty varieties of organic heirloom tomatoes, multicoloured beans and other vegetables, all on their website, grow along with Smith and Varga. 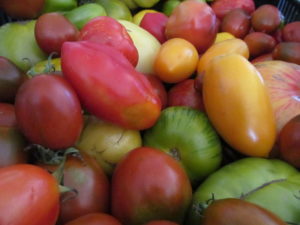 They’re growing farmer apprentices as part of ACORN’s Grow a Farmer Program too. Nurturing the hands – in- the field experience of aspiring farmers, as well as participating in webinars, they’re helping grow the next generation of producers.

Four years in, paying down debts, Smith and her partner Varga are not only making a living, they’re making a life.

They contribute to their community in other ways as well. They started a seed saving group and they donate produce to the PEI Food Exchange.

“They’ve been one of the major supporters of that initiative,” says Pauline Howard.

“For them it’s really about the stewardship of the land and a lifestyle. It’s not only a business model,” adds Howard.

That’s why Islanders have embraced them.