In the Irish High Court today, Ms. Justice Miriam O’Regan heard there’s a chance Irish based OpenHydro can survive, with a restructuring plan and new investment, according to an independent report. That’s why, on August 17, even though she noted the request was unusual since provisional liquidators had recently been selected, O’Regan appointed insolvency practitioner Ken Fennell, as interim examiner to the Irish based OpenHydro group of companies, reported the Irish Times.

An examiner is someone, who under Irish law, can assist with the survival of a company otherwise in danger of having it’s assets sold off because it had been determined by a judge that the company no longer has enough operating capital to continue operations, nor can it pay all it’s outstanding bills.

Fennell is a partner in Deloitte Corporate Finance in Dublin. He leads the firm’s restructuring services practice according to the company’s website. He said a plan would be put together with the group’s creditors to enable it’s survival, reported the Irish Times.

This intervention comes three weeks after Grant Thornton was appointed as provisional liquidators, after Irish High Court Judge Costello was told by controlling shareholder Franco based Naval Energies, that the Irish OpenHydro companies were seriously insolvent, with debts of approximately 280 million Euros.

Neil Stern, SC, representing the group of shareholders that own a 12 percent stake in OpenHydro, told Judge O’Regan  on August 17, that his clients, trying to revive the company, believe the new plan would be more advantageous than the liquidation proceedings. While provisional liquidators were previously appointed, no resolution has been passed to wind up the group, said counsel, and new potential investors were interested, adding the technology is on the cusp of being commercially viable, all this according to the Irish Times article.

Naval Energies, controlling shareholder of Irish based OpenHydro, announced on July 26th, two days after a two megawatt OpenHydro designed tidal turbine was connected to the Canadian electrical grid, that it was no longer willing to bank roll what it described as a money loosing pre commercial operation. That announcement triggered the appointment of Grant Thornton as provisional liquidators.

An Irish based Grant Thornton team have been carrying out their duties. Some major creditors have filed warrants in Canadian Federal Court on OpenHydro assets.

It is not clear whether the minority group of shareholders, represented by Stern, is aware of the affidavit filed on August 1st, in the Canadian Federal Court, on behalf of BBC Chartering, a shipping company out of Germany, issuing a warrant for the arrest of the Irish designed Turbine Control Centre, the size of a bus, now sitting on the turbine’s subsea base at the bottom of the Canadian Minas Passage, along with the recently deployed tidal turbine. The German company claims OpenHydro Canada owes it almost $900,000 CAD for transporting the TTC from Ireland to the Canadian Port of Saint John, as well as port expenses and stevedoring, according to signed documents filed in the Toronto Federal Court of Canada.

As a result of the August 17th ruling in Ireland, it is not clear whether or not the provisional liquidators will cease to act, at least until Tuesday, August 21, when the matter is scheduled to return to the Irish High Court.

OpenHydro in at 80%, had a tidal demonstration project at the heavy flow Fundy Ocean Research Centre for Energy site in the Bay of Fundy, off Nova Scotia, Canada, in the Cape Sharp Venture partnership with Halifax Headquartered Energy conglomerate Emera.

Emera issued a release on August 13 stating their intention to withdraw from this partnership, citing the OpenHydro liquidation. Without OpenHydro’s technical expertise, Emera said they couldn’t see a way to continue in the venture.

The tidal energy generating turbine is currently disconnected from the grid, and spinning in limbo, due to liquidation proceedings. OpenHydro also had projects in France and Scotland. They were in discussions for a project in Japan. Naval Energies aimed to turn demonstration projects into commercial operations, which did not happen as fast as Naval Energies had projected. 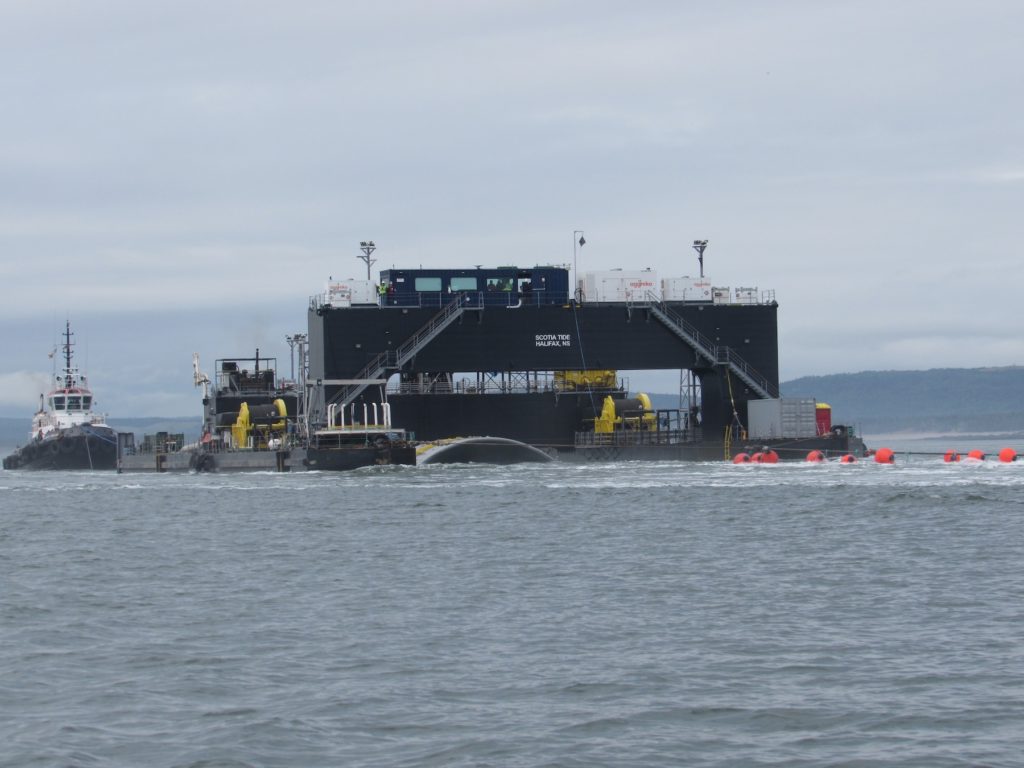 A new OpenHydro designed turbine, complete with an Irish OpenHydro designed and built power conversion unit, the TTC, was deployed on July 22, onto the ocean floor of Canada’s upper Bay of Fundy. It was connected to the electricity grid on July 24th. The Irish Open Hydro tech team had commenced commissioning. They were testing the turbine’s performance in various tidal cycles well into the 25th. That was before pack up and cease operation orders came down on the 26th.

The grid connection was subsequently disconnected for safety reasons due to the liquidation proceedings. Due to the design of the open centre turbine, the blades are still turning, reversing direction as the tides ebb and flow. Near field environmental monitoring devices are shut off due to the mandated power disconnect, even though it is positioned in what fisherman Darren Porter refers to as the ‘highway of life’. Currently, because near field monitoring devices are not collecting data, the blades are spinning in violation of the Canadian Department of Fisheries Act.

NOTE: This article was first revised on August 18th to include a statement reported by the Irish Times about liquidation ceasing until the next Irish Court date on August 21st. That statement was revised on August 22nd after an interview with a knowledgable Irish source indicating things were not so clear cut.