Jeremie Bernardin is not a car salesman, but as an electric vehicle enthusiast, he sees a need for a broad approach, like in British Columbia, to get Nova Scotians to consider buying EVs. That’s what he told CBC Radio Host Norma Lee MacLeod when he called into Wednesday’s segment of Maritime Noon.

MacLeod asked listeners, “What would it take to get you to buy an electric car? Are government subsidies the answer?”

She led the discussion by noting the small number of electric vehicles registered in the Maritimes and stating that most of the electric vehicles purchased in Canada are bought in Ontario, British Columbia and Quebec; provinces that offer financial rebates to their residents who buy them, up to $14,000.00 in Ontario. 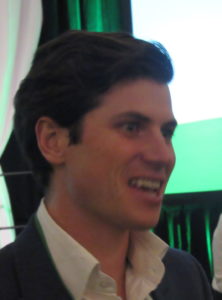 Jeremie Bernardin at the 2017 Bright Business Conference and Awards in Halifax.

If you missed the show, broadcast throughout the Atlantic Canadian Provinces, here are some key points made by the featured guest Dan Woynillowicz, Policy Director for Clean Energy Canada and phone – in caller, Nova Scotia resident Bernardin.

Woynillowicz told CBC’s MacLeod and her listeners, governments in the rest of Canada need to do more to get people to make the switch. He told MacLeod,

“Where we are predominantly seeing increases (in sales) are in the three provinces that have not only rebates for people purchasing electric cars, but also have invested significantly in charging infrastructure and are doing other things to make consumers more aware of the benefits of switching to an electric car.”

“In 2017 electric car sales were up 65% over 2016,” said Woynillowicz, “We’re starting to bump into higher percentages of sales in those provinces that have a comprehensive approach to encouraging people to switch to electric cars. It’s not just, do consumers want to have electric cars, it’s also, do they have access to electric cars?”

Bernardin says, giving government incentives to lower the purchase price is not enough, and explains his rationale.

“It’s not just a discount on a car that’s needed. There needs to be an outreach campaign to educate the population on what it’s like to own an electric vehicle. And time – of – day rates for electricity, so if you own an electric vehicle you are perhaps getting a better deal if you charge your car at night through Nova Scotia Power,” said Bernardin.

That would encourage off peak night time charging, which would help the utility even out their load/demand curve at night time when demand is historically lighter.

“I used to live in British Columbia for ten years,” said Bernardin,” and I worked on some of the outreach campaigns with electric cars. That was the key to success, was to have an approach that covered all areas. Like support for converting your commercial fleet for your company. The government would go in and do a suitability study for you.”

“There needs to be charging infrastructure,” said Bernardin. “There is a lot of range anxiety for people that haven’t driven an electric car before. They kind of think they need them everywhere. I think there needs to be fast charging outside of the city, so you can go long distances. If I want to drive to Montreal, I want to be able to make that trip comfortably and be able to charge quickly. But when it comes to driving, commuting, A to B at work, you know, 85% of charging will be done at home. You do it at night when you are sleeping. You wake up to a full battery.”

“But there is a lot of studies that prove that adoption rates of electric vehicles drastically increases if there is a place to charge at work,” added Bernardin. “So having a program that the government would support installing charging stations at work would have a really great impact on the adoption rate for electric cars,” said Bernardin.

“I think Jeremie is correct,” said Woynillowicz. “Evidence suggests that people who have electric cars predominantly charge them at home. But if you’re on a road trip, if you are going between cities or towns, you may need to charge up, so that’s where it’s critical to have those fast chargers along Canadian highways,” said Woynillowicz.

“The Federal government has been investing heavily and strategically in getting charging between cities, as opposed to just inside the cities. You know, for people to be able to charge at work, or at the shopping mall, that’s going to help as well with this concept of range anxiety, where people feel they’re going to get stranded by the side of the road because their battery is dead.”

“I think it’s important to note that this is where we all need to better understand our driving habits and then understand electric car technology and how far it has advanced,” added Woynillowicz.

“Transport Canada has done a study, and what they found is, ninety percent of Canadians drive fifty kilometres or less per day. If we look at say the Nissan Leaf, or the Volkswagen eGolf, they have a range over 200 kilometres, so the vast majority of Canadians and their driving habits, they would be easily able to get to work, pick up the kids, get some groceries and get home with very little concern about whether they were going to be able to do that. In fact they’d probably be able to do that multiple days in a row before they would need to charge it up at home,” said Woynillowicz.

Bernardin sums up his views on getting Nova Scotians into electric vehicles like this: “There needs to be work from many different directions.”