Danny Ferguson can hardly wait till later this morning, the first day of the school year. That’s when he’ll be driving one of New Brunswick’s first two 100% electric school buses. He can hardly wait to hear what the kids will have to say. 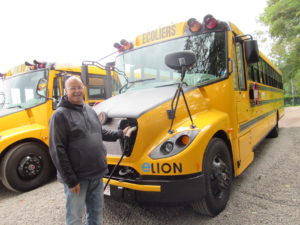 He said they’re made in St. Jerome, Quebec. “They’re made of fibreglass so they’ll be good in the salt and snow,” he added.

He thinks the company is doing well. “They shipped some to California and some to New York State. They piloted them last year in Quebec and Ontario. They got through their winters so they should have no trouble in ours.” he said.

He thinks the lids will like the name, the eLion. But it’s pretty quiet, it doesn’t roar.