After Eastern North America’s 1998 Ice Storm, Cam Farnell survived in Kingston, Ontario without power in frigid weather for days in his grid connected home. That’s when he started researching the merits of off-grid living.

Fast forward to 2017. Cam Farnell and his wife have lived happily off grid in Upper Tantallon, Nova Scotia for five years. He recently gave a talk to a crowd of over 60 people, at the Tantallon Library. 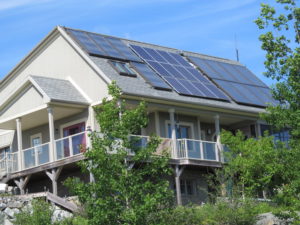 He told the Tantallon crowd he realized in that ’98 ice storm that his prior grid connected home didn’t function so well in a power outage. Energy security was a huge motivation for Farnell to switch to generating his own solar powered electricity (and hot water) enabling off grid living.

Now, when there are outages all around him, to a weather event, Cam functions within his domain as though there hadn’t been a storm. He’s not connected by wires and poles vulnerable to being downed and disconnected in a storm.

Farnell repeatedly circled back to phantom electrical loads and conscious ways he minimizes them in order to not over spend his energy budget. A phantom load is an energy draw that a grid connected home owner might not think about. In a conventional grid connected home, a typical phantom load is created by someone’s digital TV set top box, so they have ‘always on’ programming and recording cababilities for TV shows they don’t want to miss. Anything that is NEVER REALLY OFF, that you leave plugged in while you are not actively using it, creates a phantom load. Leaving a phone charger plugged in while not using it is another smaller example of a phantom load. Microwave ovens are ‘always on’ enough to  to run the clock and have other push button functions at the ready. Consider other kitchen appliances. How many clocks do we need in our kitchen?

People living off grid cannot have things plugged in, not being used, that are constantly sipping their self generated energy supply, emphasized Farnell.

His electriciy is generated by solar PV panels. He has Surrette batteries in his basement that will store energy for several dark or rainy days. He has twelve solar thermal panels (made in Dartmouth) that heat his hot water, and that hot water is also a heat source for his home. Some of this hot water heat is run through a concrete slab in his floor. The thermal mass will hold and radiate the heat after it is created.

There is a conscious living commitment to Cam and his wife’s way of life. A sunny day is a good time to do a wash and vacuum. Cam would say he has all the comforts of home, even in a storm, when his neighbours are without power.

Farnell’s talk was supported and publicized by the Transition Bay Initiative. Transition Bay is part of the global Transition Towns Initiative started in the U.K.. The trust behind the initiative is for communities to develop resilience strategies so they can learn to adapt in an increasingly carbon constrained world.