North of Paris international UN Negotiators worked in meeting rooms behind closed doors in the lead up to what would become the historic Paris Accord. Other delegates attended plenary sessions.

Some COP21 delegates took time out to view the Solutions Expo at the Grand Palais in the heart of the city. Many searched for take aways that might work in their corners of the world.

A highlight of the Solutions Expo for Mary Ellen Donovan, a COP21 delegate from Halifax, Nova Scotia, Canada, was the prototype 100% electric bimodal public transportation system ~ Crystal ~ manufactured by Lohr, near Strasbourg, France.

Donovan liked the price point, of 90 thousand euros or about $120, 000.00 CAD (Dec. 2015) for one stand alone interconnected electric unit (similar to linked train cars) that can be driven by a professional bus driver, in lieu of a traditional city bus. In this connected mode, it can transport up to 58 passengers during rush hour.   or connected to three other units, and When linked together like train cars and used like a bus, Laura Korth, marketing officer for Lohr explains, “some people can stand”, so the potential load factor increases.

In off peak travel times individual units, or pods, can be booked and used as a public car share.

According to Donovan, a former lawyer with HRM, when she ran the numbers, compared to approximately five hundred thousand (2015) dollars for one 40 seat Metro Transit bus, these twin use vehicles stack up well.

She sees potential in these electric vehicles as a viable piece in the puzzle to solve a regional transportation challenge for Halifax Regional Municipality. She can even envisions the possibility of them working as public transit between Halifax and Truro.

“More charging stations may need to be installed along routes to make these vehicles a reasonable choice to and from some of the more remote areas of HRM,” Donavan pointed out. 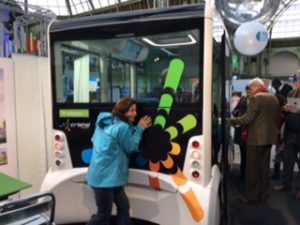 The Cristal by Lohr brochure states the onboard battery has enough power to run all day. That would enable overnight off peak charging.

Right now this flexible bimodal transportation system is in the prototype stage of development. Lohr plans to road test them in a pilot project in the fall of 2017 in Strasbourg, France.

Questions? Comments? What do you think?